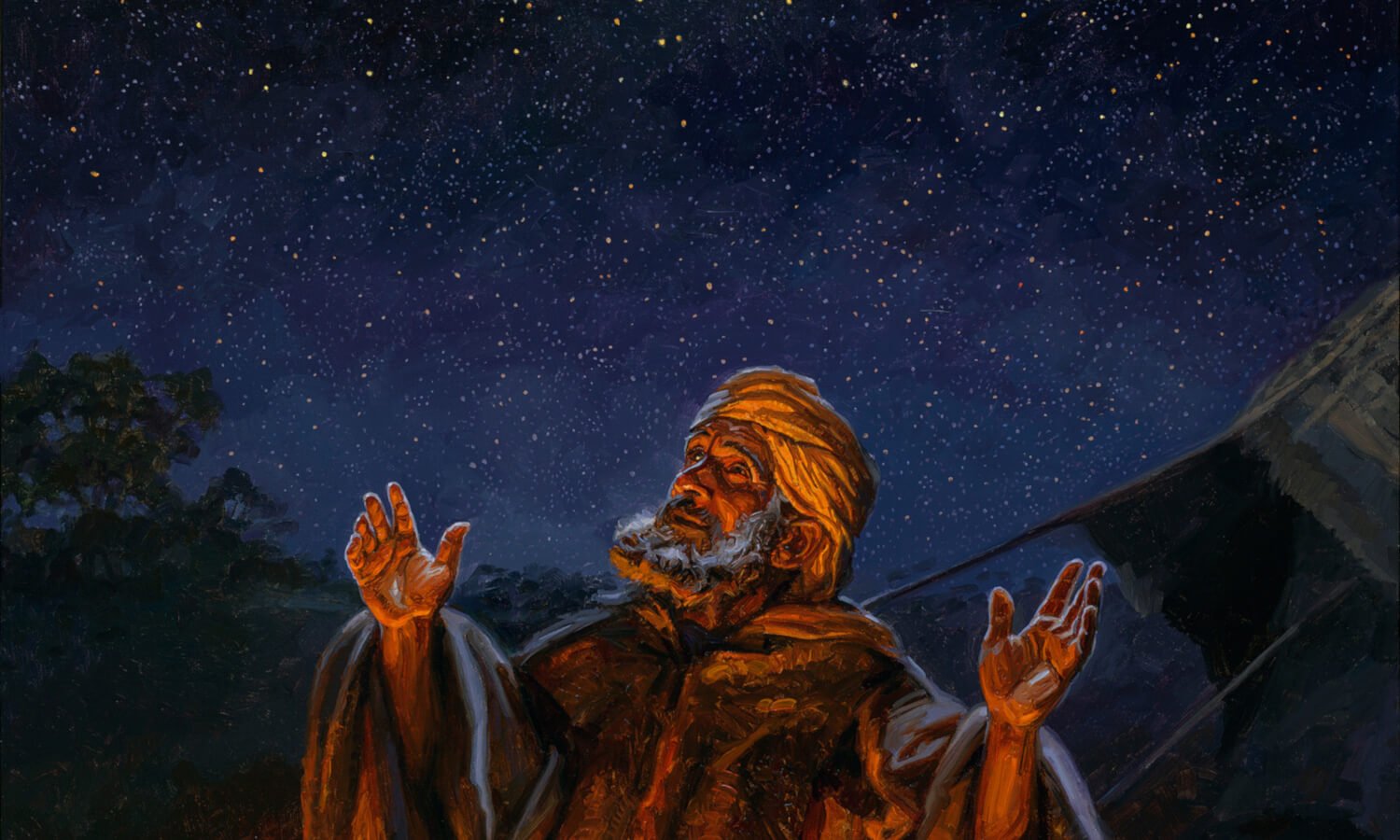 Abraham is mentioned often in the Bible. The book of Genesis records his life story in much detail. In fact, there is far too much information about Abraham to cover it all in one article! I’ll just mention some important points. You can read the whole story about Abraham in the Bible book of Genesis, chapter 12 – 25. Later on, he is often referred to as one of Israel’s ancestors. He is even called “Abraham, who is the father of us all”! (Romans 4:16)

Abraham lived around 1800 BC (see timeline). He was born in Ur, a city in the south of Babylonia, but for most of his life he traveled as a nomad in the region of present day Israel. Leaving his home country was an explicit command of God to Abraham.

The Lord told him: “Go from your country and your kindred and your father’s house to the land that I will show you. And I will make of you a great nation, and I will bless you and make your name great, so that you will be a blessing. I will bless those who bless you, and him who dishonors you I will curse, and in you all the families of the earth shall be blessed” (Genesis 12:1-3).

This promise was the beginning of God’s special relationship with Abraham’s descendants, the people of Israel. It has found its ultimate fulfillment in Jesus Christ, a Descendant of Abraham and the ultimate blessing for all the nations of the earth.

Abraham had to wait for a long time

God had called Abraham when he was 75 years old. By then, Abraham and his wife did not have any children. And yet, God had promised to multiply him… That was a struggle for Abraham, and he even tried to solve the problem himself by marrying one of his servants and having a son by her. But on various occasions, God reassured him of His promise. The Bible gives us an intimate insight into Abraham’s encounters with the Lord, e.g. in Genesis 15:1-6.
“After these things the word of the Lord came to Abram in a vision: ‘Fear not, Abram, I am your shield; your reward shall be very great.’ But Abram said, ‘O Lord God, what will You give me, for I continue childless, and the heir of my house is Eliezer of Damascus?’ And Abram said, ‘Behold, You have given me no offspring, and a member of my household will be my heir.’ And behold, the word of the Lord came to him: ‘This man shall not be your heir; your very own son shall be your heir’. And He brought him outside and said, ‘Look toward heaven, and number the stars, if you are able to number them’. Then He said to him, ‘So shall your offspring be’. And he believed the Lord, and He counted it to him as righteousness.”
Finally, when Abraham was 100 years old, his wife Sarah bore him a son. The book of Hebrew summarizes: “And thus Abraham, having patiently waited, obtained the promise” (Hebrews 6:15).

Abraham as an example of faith

In the New Testament, Abraham is mentioned as an example of faith: “By faith Abraham obeyed when he was called to go out to a place that he was to receive as an inheritance. And he went out, not knowing where he was going” (Hebrews 11:8-10). Later in his life, when his son Isaac was born, Abraham’s faith was tested once more.

God told him: “Take your son, your only son Isaac, whom you love, and go to the land of Moriah, and offer him there as a burnt offering on one of the mountains of which I shall tell you” (Genesis 22:2). That must have been the hardest moment in Abraham’s life. But his faith in God was stronger than his doubts and resistance.

“By faith Abraham, when he was tested, offered up Isaac, and he who had received the promises was in the act of offering up his only son, of whom it was said, Through Isaac shall your offspring be named. He considered that God was able even to raise him from the dead, from which, figuratively speaking, he did receive him back” (Hebrews 11:17-19).

In the end, Isaac was saved because God provided a ram that was offered instead of the boy. This is a powerful picture of Jesus’ atoning death for all believers – including Abraham.

Abraham as the father of the Jews and of all believers

Abraham, together with his son Isaac and his grandson Jacob, is the ancestor of the people of Israel / the Jews. The covenant that God made with Abraham, was passed on to later generations and gave the Israelites a special place among the nations. They were proud to be Abraham’s descendants.

But God had promised that other nations would be blessed through Abraham as well, and that was fulfilled by the ministry of Jesus Christ. As the apostle Paul explains: “This mystery is that the Gentiles [non-Jewish people] are fellow heirs, members of the same body, and partakers of the promise in Christ Jesus through the gospel” (Ephesians 3:6).

Most people are not descendants of Abraham in a biological sense. But he is nevertheless called “the father of us all”, because he is an example of the saving faith that we should all follow: “That is why it [=the promise of blessing and salvation] depends on faith, in order that the promise may rest on grace and be guaranteed to all his offspring-not only to the adherent of the law but also to the one who shares the faith of Abraham, who is the father of us all, as it is written, I have made you the father of many nations” (Romans 4:16-17).

Thanks to GospelImages for the wonderful image