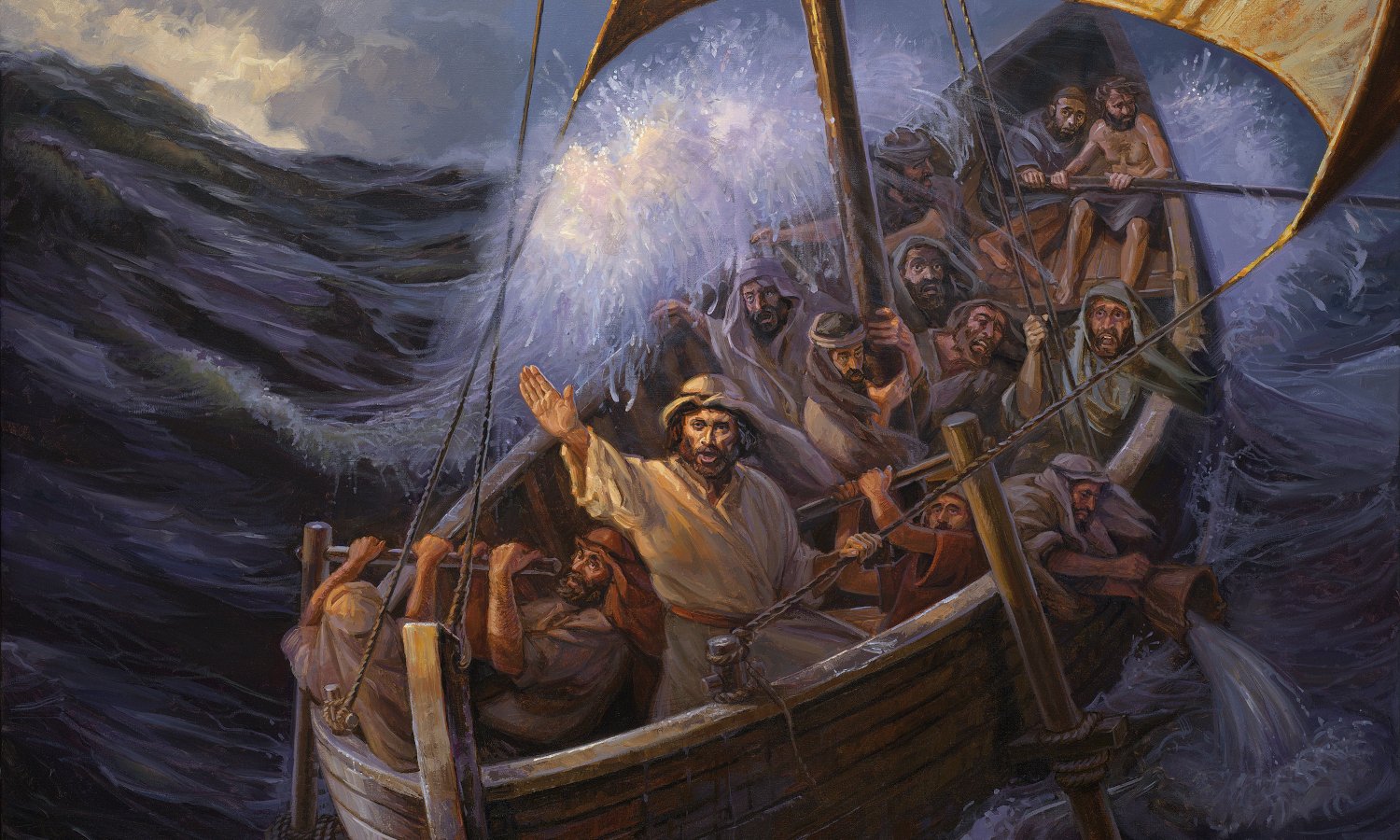 In the first chapters of the Bible, we read how God created everything very good, including the first human couple, Adam and Eve. But these first humans disobeyed God, and their sin severely damaged man’s relationship with the Lord. Moreover, their disobedience brought suffering and death on earth.

But the story does not end there. God promised to put enmity between the human race and Satan, who had tempted them to sin. God said that a descendant of Adam and Eve would bruise Satan’s head.

Promises about the Messiah

Further on in the Bible, God gives more details about this coming Descendant. He would be from the family of Abraham, and would restore goodness and blessing to the world. He is depicted as a king who will bring peace, harmony and abundance. He will be from the royal line of David (see for example Jeremiah 33:15-17).

Israel’s history knows a couple of heroes, but none of them turned out to be the promised Savior. All these men were sinful themselves, and could not overcome evil. On the contrary, both the people and its kings turned out to be so sinful that God sent them into exile. But the prophets kept pointing to a Man who would save the Israelites from their desperate situation, make everything well, and bring spiritual restoration. Some of these prophecies showed that He would not be an ordinary human.

The prophet Isaiah, for example, said He would die in humanity’s place (Isaiah 53:5), but in another chapter, he calls Him “Mighty God, Everlasting Father, Prince of Peace”, whose government will never end. He also says that “the eyes of the blind shall be opened, and the ears of the deaf unstopped” and “waters break forth in the wilderness, and streams in the desert” (Isaiah 35:5-6).

The prophet Micah says He “is to be ruler in Israel, whose coming forth is from of old, from ancient days” (Micah 5:2). The Old Testament also contains many prophecies about the political restoration of Israel, and about God becoming “King over all the earth” (see Zechariah 12:8-9; Zechariah 14:9).

The Old Testament thus gives many names, promises and descriptions of Someone who would come to change things for the better, but it is not easy to combine these into one coherent picture. Will all these aspects be fulfilled in one person? And will all this happen at one point in time? It is not easy to answer these questions.

Throughout the centuries, the people of Israel developed certain expectations of the coming Savior, whom they mostly called “Messiah” (which is a Hebrew word, translated in Greek as “Christ”). This word means “anointed one”, and was for example used as a designation for kings that God had appointed and equipped for their task.

The Israelites hoped and expected that the coming of the Messiah would bring about an era of social, political and spiritual restoration. Because they were being oppressed by other nations, the idea of a King who would restore their political freedom was especially attractive. For many, this aspect was more pressing than spiritual restoration, and far more appealing than Isaiah’s portrait of a Servant of the Lord who would be crushed and rejected.

Jesus did not meet all expectations

When Jesus was about to start His public ministry, He was announced by John the Baptist. This prophet told the people that God’s Kingdom was at hand, and that they should repent. He was the messenger foretold by Isaiah (see Mark 1:2-4).

But even John the Baptist was not sure whether Jesus was the Messiah. When he was imprisoned by king Herod, he sent his disciples to ask Jesus: “Are you the one who is to come, or shall we look for another?” (Luke 7:19). John had announced the Messiah as a judge who would execute God’s wrath (Matthew 3:10-12), but Jesus did not do that at all.

Jesus’ disciples did believe that He was the Messiah, see John 1:41 and Matthew 16:16. But they did not fully understand what this entailed. They hoped that He would become king and expel the Roman oppressors. They did not understand that the Messiah had come to suffer and die in their place. They were shocked when this happened, even though Jesus had foretold it multiple times (see Mark 8:31; 9:31; 10:34).

Luke 24:21 and Acts 1:6 make clear that they still hoped for Israel’s political restoration after Jesus’ death. Jesus does not say this will never happen, but it is not His task – nor the task of the disciples – to bring political freedom. He has come to free people from their spiritual bondage, and this Gospel must be proclaimed over all the earth (Acts 1:7-8).

Jesus is the Messiah

Jesus is rightly named “Christ”, for He indeed is the promised Messiah. He calls His disciples “foolish” to not believe what the prophets have spoken about Him, that the Messiah had to suffer and die, and then be raised from the dead (Luke 24:25-27). In answer to John the Baptist’s question, Jesus says: “Go and tell John what you have seen and heard: the blind receive their sight, the lame walk, lepers are cleansed, and the deaf hear, the dead are raised up, the poor have good news preached to them” (Luke 7:22).

These are clear references for a Jew who knew the Old Testament Scriptures, for they echo Isaiah 35:5 and Isaiah 61:1. Jesus shows that He is indeed fulfilling centuries old prophecies of hope and restoration. His miracles were not “just” means to help the people involved, but signs to prove that He was the Messiah.

When Jesus was arrested, the high priest asked him: “I adjure you by the living God, tell us if You are the Christ, the Son of God.” Jesus said to him, “You have said so. But I tell you, from now on you will see the Son of Man seated at the right hand of Power and coming on the clouds of heaven.” (Matthew 26:63-64). This settled the discussion: Jesus was sentenced to death for blasphemy. His affirmation that He was the Christ, led to His death.

Not all prophecies have been fulfilled yet

Jesus’ answer in Matthew 26:63-64 indicates that His work is not yet completed. Yes, His work as Savior has been finished (John 19:30). But He will return on the clouds of heaven to judge humanity. He has already come as a Savior who shows God’s love and proclaims forgiveness. At the end of time, He will return as Judge to condemn those who did not accept his offer of grace (see Revelation 20:12; Matthew 25:31-32; Acts 10:42; 2 Timothy 4:1). Then He will become a glorious King whose reign will last forever (Hebrews 1:8, Revelation 11:17-18).

Many prophecies about the Messiah have already been fulfilled in Jesus. For some prophecies, this is obvious, for example the prophecy in Zechariah 9:9 “Behold, your King is coming to you; righteous and having salvation is He, humble and mounted on a donkey, on a colt, the foal of a donkey.”

This was fulfilled at Jesus’ triumphal entry into Jerusalem, as recorded in John 12:14-16. Other prophecies were fulfilled in unexpected ways, for example when Jesus said that He is indeed a King but His kingdom is spiritual, not “of this world” (John 18:36). A last group of prophecies, especially the verses about the Messiah as King and Judge are still awaiting their complete fulfillment at Jesus’ second coming.

Many Jews don’t believe that Jesus is the Messiah

In Jesus’ days, many Jews did not believe in Him as the Messiah. And this has not changed since. There are so-called “Jewish Christians” or “Jewish followers of Jesus”, but they are only a minority.

However, the Bible gives hope that “all Israel will be saved” (Romans 11:25-32). This will fulfill an Old Testament prophecy of the prophet Zechariah: “And I will pour out on the house of David and the inhabitants of Jerusalem a spirit of grace and pleas for mercy, so that, when they look on Me, on Him whom they have pierced, they shall mourn for Him, as one mourns for an only child, and weep bitterly over Him, as one weeps over a firstborn. … On that day there shall be a fountain opened for the house of David and the inhabitants of Jerusalem, to cleanse them from sin and uncleanness” (Zechariah 12:10; 13:1).