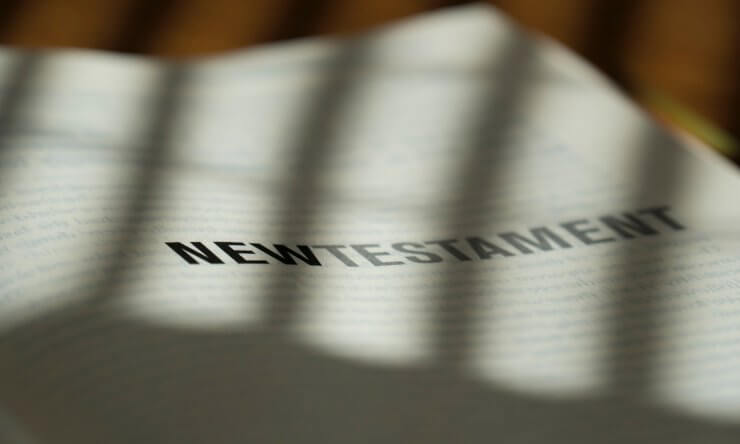 The Old Testament (OT) and the New Testament (NT) are two parts of God’s holy Word, the Bible. Although the Old Testament is called “old”, that doesn’t mean it is out-dated or irrelevant. It simply means that the OT records God’s promises and relationship with his people before Christ came. The New Testament, or NT, records the life of Jesus Christ and the things that came after Christ.

The Old Testament makes up about three-fourths of the entire Bible, and the New Testament contains the last fourth. The Old Testament covers human history from creation until about 400 BC, which is a period of thousands of years. The New Testament records the life of Jesus Christ and the period of the early church, thus covering about 100 years only. See this timeline.
The range of writing styles is different as well: the New Testament has historical books about the life, death and resurrection of Jesus Christ (the Gospels) and about the early church. Then it has a lot of letters, and it ends with one prophetic book regarding the future (Revelation). The Old Testament has a more diverse range of styles, including songs and proverbs besides various historical and prophetic books.

The old and the new covenant

The word “testament” literally means “covenant”. In the Old Testament, God made a covenant with Adam that if he obeyed God, then he would have eternal life. But Adam sinned and broke that covenant (Genesis 2-3, Hosea 6:7), resulting in sin and death. In response, God made another covenant that He would send a Savior to rescue people from sin and death. The first time God mentions that Savior-to-come is in Genesis 3:15, which is a reference to Christ: “I will put enmity between you and the woman, and between your offspring and her offspring; He shall bruise your head, and you shall bruise His heel.”

Before Christ came, however, God made some other covenants in the Old Testament to prepare people for Christ’s coming. God made promises to a man named Abraham (Genesis 12-15), showing how people are brought into a right relationship with God, namely through faith. In Genesis 15:6, it says “And he [Abraham] believed the LORD, and he counted it to him as righteousness.” Many years after Abraham, God sent Moses to his people to give them the Ten Commandments and various laws for them to follow. These laws were meant to help them understand that God was holy, and that they needed a Savior because they were not holy.
The Old Testament also shows people’s reaction on God’s covenants. We see a repeating pattern of unfaithfulness from the side of the people. They were warned over and over again, they faced God’s judgments — but when they returned to the Lord, it was only for a certain time. The large picture of the Old Testament makes clear that people really needed the promised Savior in order to have their relationship with God restored.

When Jesus Christ came, the promises that God had made many years before in the garden of Eden (Genesis 3:15) and to Abraham (Genesis 15:6) came to pass, and it became clear that people are saved by grace alone through faith alone in Christ alone (Ephesians 2:8-10, John 14:6, Acts 4:12, 2 Corinthians 5:21). The new covenant (or “testament”) of salvation by God’s grace was fulfilled in Jesus Christ, and replaced the old covenant. “He is the mediator of a new covenant, so that those who are called may receive the promised eternal inheritance, since a death [= Jesus’ own death!] has occurred that redeems them from the transgressions committed under the first covenant” (Hebrews 9:15).
The New Testament tells us how Jesus Christ fulfilled this new covenant, and explains what it is like to live under this covenant as redeemed and free people who enjoy a restored relationship with God.

100% Free Bible Course
We now offer a 100% free, Internet based Bible course. In 15 short lessons you will learn God's message for you in his Word.
Click here to enroll
covenant New Testament Old testament

What does the Bible say about infant baptism?