What does it mean that the Bible was inspired by God? 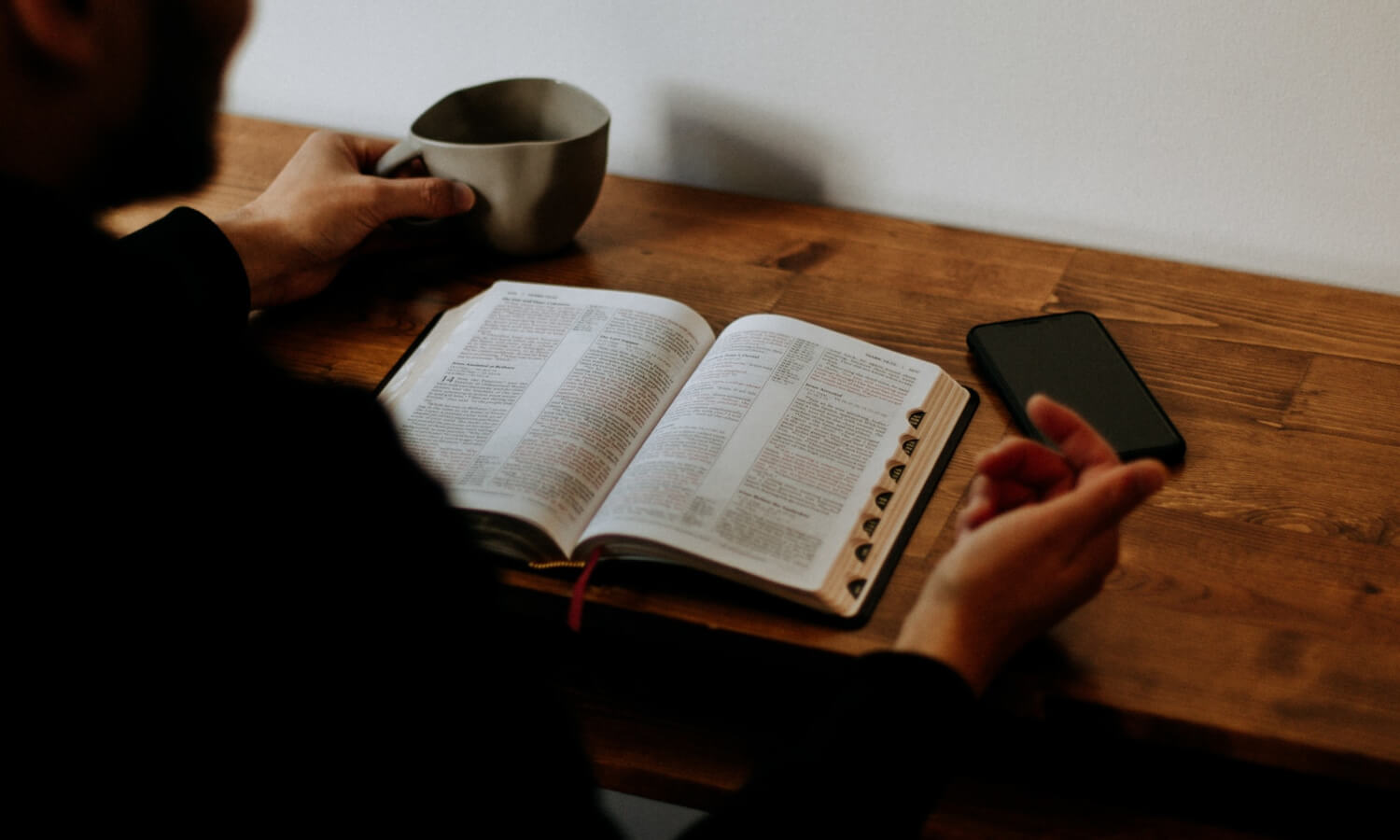 We Christians claim that the Bible has special authority because it has been inspired by the Lord God. What do we mean by this phrase? What is divine inspiration?

Where does the word “inspiration” come from? Is it in the Bible?

When talking about the inspiration of the Bible, the obvious starting point is to read 2 Timothy 3:16. In Greek, this verse says that πᾶσα γραφὴ θεόπνευστος. Modern Bible translations choose different words here, for example:

The language used in the old King James Version has particularly influenced theological vocabulary, and thus the word “inspiration” is widely used, but not in the way we think of it today. Let’s have a closer look.

The Bible uses the word “inspiration” in a special way

In everyday life, we often use the word “inspiration” when we feel mentally stimulated to do or feel something, especially to do something creative. The person or thing that inspires us, is a starting point for our own thought process, but does not dictate the final outcome. People feel inspired by beautiful music, or by the ideas of a great philosopher. A painter takes his inspiration from nature or from some architectural highlights. Christians feel inspired by Jesus’ example and by ‘heroes of faith’. That’s valuable in our daily life, but this is not what the Bible means in 2 Timothy 3:16.

What does the word “inspiration” mean in the Bible?

The phrase πᾶσα γραφὴ θεόπνευστος literally means “all Scripture (is) God-breathed”. Note that the word πνεῦμα means “breath”, but also “wind” and “breath of life, spirit” (as opposed to the body). The Bible uses this word for God the Holy Spirit as well. The same range of meaning applies to the Hebrew equivalent of πνεῦμα that is used in the Old Testament: rûaḥ (רוּחַ). So, when the Scriptures are θεόπνευστος, this means they come from God’s Spirit and/or were spoken by God.

He spoke Himself, but by means of human authors. These men had distinctive personalities and writing styles. They lived in various centuries and countries. Some wrote only a short letter, others several books. But the very words they wrote were inspired by God. Therefore, the Bible we have today is rightly called “the Word of God”, not “the word of men whose ideas are rooted in their relationship with God”.

How were the authors of the Bible inspired by God?

The Bible writers were not just vaguely “inspired” by the Lord as an artist is inspired by nature, but the Holy Spirit selected them and guided them in a supernatural way so that the written words of the Bible were also the words of God. They wrote only what the Lord intended. 2 Peter 1:21 explains: “For no prophecy was ever produced by the will of man, but men spoke from God as they were carried along by the Holy Spirit.” Not only were the human authors kept from making errors, but also from omitting anything. Their writings are accurate and complete. This process extended until the time the document was written in its final form, and thus includes the work of later editors who were also guided by God.

Which parts of the Bible were inspired by God?

The Bible itself claims that “all Scripture”, so the whole Bible[1], was inspired by God (2 Timothy 3:16-17, compare 1 Corinthians 2:12-13). So, it is not only the basic concepts or story line that is inspired, or only the words of Jesus Christ, but every single Bible verse from Genesis to Revelation. This also implies that we can’t delete parts of the Bible, or add extra books: “Every word of God proves true; He is a shield to those who take refuge in Him. Do not add to His words, lest He rebuke you and you be found a liar” (Proverbs 30:5-6). The final chapter of the Bible even warns us: “I warn everyone who hears the words of the prophecy of this scroll: If anyone adds anything to them, God will add to that person the plagues described in this scroll. And if anyone takes words away from this scroll of prophecy, God will take away from that person any share in the tree of life and in the Holy City, which are described in this scroll” (Revelation 22:18-19).

Let me insert an important note here. If we read the Bible, we do so with a limited understanding. Therefore, our interpretation of God’s written Word may be wrong. It is really important to distinguish between “what the Bible says” and “what I think the Bible says”. We should always ask the Holy Spirit to enlighten us as we read and interpret the Scriptures (see Ephesians 1:17-19).

Why is it important that the Bible was inspired by God?

Human words are fallible. God’s words are not. Every normal book, no matter who wrote it, can contain errors or be one-sided and incomplete. It becomes outdated. People can argue about it or disagree with the claims it makes. Not so with the Bible.

The original Bible books were written in Hebrew, Aramaic and Greek. Since then, they have been copied and translated into many more languages so that as many people as possible have easy access to God’s Word. However, the process of copying and translation was not inspired by the Holy Spirit in the same way as the process of writing. Bible translators have the responsibility to do their work carefully. They should make sure their translations express the original text accurately and clearly. But translators are not infallible. Often, there are various good options to translate one single phrase.

Sometimes the meaning of certain Hebrew or Greek words can’t be covered fully by one single word in the target language, and translators have to make choices. Over time, translations are often revised and updated since languages constantly change and our knowledge of Hebrew and Greek may grow, or opinions on how best to translate particular verses may differ from one committee to the next. So, translations are fallible. Only the originals they are based on, are inspired by God. However, we do have many good translations that faithfully reflect the authoritative Word of God.

What is the difference between inspiration and revelation?

The meaning of these two words is similar, but not exactly the same. In the Bible, there is a lot of divine revelation. This is information that people would not otherwise know. God reveals His eternal plan of salvation. The apostle Peter writes about this: “Concerning this salvation, the prophets who prophesied about the grace that was to be yours searched and inquired carefully, inquiring what person or time the Spirit of Christ in them was indicating when He predicted the sufferings of Christ and the subsequent glories. It was revealed to them that they were serving not themselves but you, in the things that have now been announced to you through those who preached the good news to you by the Holy Spirit sent from heaven, things into which angels long to look” (1 Peter 1:10-12).

The apostle Paul writes in 1 Corinthians 2:9-10, “As it is written, What no eye has seen, nor ear heard, nor the heart of man imagined, what God has prepared for those who love Him- these things God has revealed to us through the Spirit. For the Spirit searches everything, even the depths of God”.

Revelation is thus about God giving His truth to humans. Inspiration, as we saw earlier in this article, is about the process of writing down God’s Word. This includes things God revealed to the Bible writers, but it also includes recordings of historical events, of personal experiences and so on, that did not need special revelation. It even includes descriptions of people’s lies and misunderstandings. For an example, read Psalm 14:1. The divine inspiration makes sure these events, thoughts and words are accurately recorded and explained, so that they fulfill their purpose as God’s divine Word.

The Bible is both a human and a divine book. It has its source in God, but has been written down and recorded by humans. This process of writing was guided by the Holy Spirit. That’s what we call “divine inspiration”.

[1] Strictly speaking, we can apply these words only to the Scriptures that had been written by then, not to the books that were written after Paul’s letters to Timothy. However, we believe that the Holy Spirit inspired the writers of the last Bible books as well, and guided the selection of books that should be included in the Bible. The apostle Peter, for example, considers all of Paul’s letters as “Scripture” in 2 Peter 3:15-16. See this article for more information.