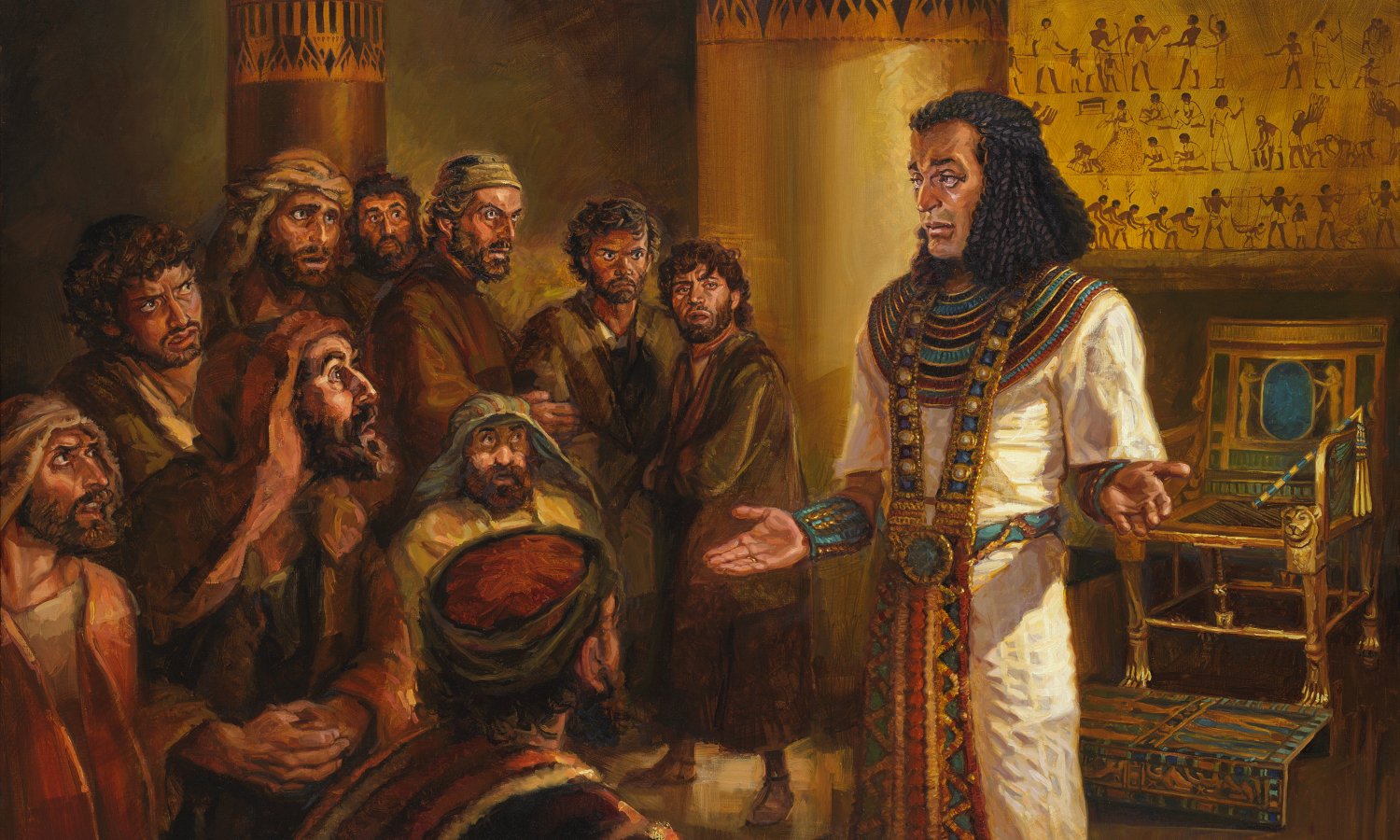 Joseph was the son of Jacob and the grandson of Isaac. He grew up in the land of Canaan, but spent most of his life in Egypt. We are not completely sure when he lived exactly; some think from 1915 to 1805 BC, others think ± from 1750 to 1640 BC.

Joseph was rejected by his brothers

Joseph grew up in a large family. His father had four wives, each of which had several children. In total, there were twelve sons and at least one daughter. But father Jacob loved his wife Rachel more than the others, and he gave her sons Joseph and Benjamin a special treatment, e.g. by giving Joseph a special colorful robe. The ten older brothers became jealous of Joseph, and this was only made worse when he had special dreams in which all the brothers bowed down for him.

One day, the brothers were pasturing their father’s flock, and Joseph was sent to see how they were doing. The brothers took this opportunity to get rid of him: they threw him into a pit, and then sold him as a slave to some traders who happened to pass by. To hide all this from their father, they pretended that Joseph had been killed by a wild animal.

God was with Joseph, despite his difficult circumstances

Joseph’s life was turned upside down. He was brought to Egypt and sold as a slave. He undoubtedly felt confused, sad, and alone. But the Bible tells us that the Lord was with him there (Genesis 39:2; 39:23)! His work was blessed and he got a good position in the house of his master, until his master’s wife falsely accused him of an attempt to sleep with her. Then Joseph was put in prison – but again the Lord was with him.

Two fellow prisoners had dreams that only Joseph could interpret. These were prophetic dreams, and they indeed came true. Years later, Pharaoh had confusing dreams too. Joseph was called to interpret them. God showed him that the dreams warned of a seven-year long famine, after a seven year period of plenty. Pharaoh was very much pleased with Joseph’s interpretation, and appointed him as ruler over all of Egypt to gather as much grain as possible to help the Egyptians prepare for the years of famine.

Joseph’s position changed from a beloved son to a slave, then to a prisoner, and finally to a viceroy, and God was with him all the time.

It was not only the land of Egypt that faced years of famine, as God had foretold in Pharaoh’s dreams. Father Jacob and his family, who still lived in the land of Canaan, were also running out of food. The ten brothers went to Egypt to buy grain, and there they met Joseph again! But they did not recognize him. This gave Joseph the opportunity to put them to the test: were they still jealous and mean, or had they changed over the years?

Of course, Joseph could also have used this chance to take revenge for the evil they had done to him. But he didn’t. He forgave them wholeheartedly and invited them to move to Egypt, where he could provide for them. He concluded that “you meant evil against me, but God meant it for good, to bring it about that many people should be kept alive, as they are today” (Genesis 50:20).

Back in Canaan, when he was only 17 years old, Joseph had dreamed that his brothers bowed down for him. Real life seemed to be very different, however. But Joseph never forgot about the dreams, nor did he turn his back to the Lord. And finally, when Joseph was appointed as ruler and his brothers came to buy grain, the dreams were shown to be true.