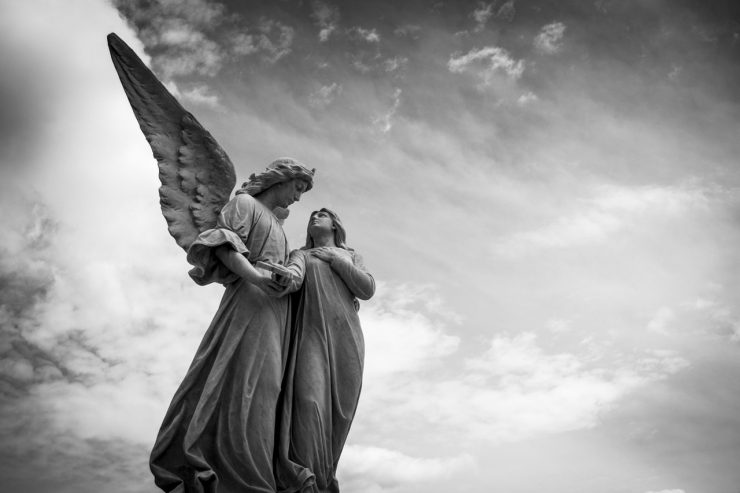 Do angels have wings?

Angels are “ministering spirits sent out to serve for the sake of those who are to inherit salvation” (Hebrews 1:14). As a spiritual presence, angels are normally not visible to the human eye. This is seen in the story of Elisha being protected by an army of angels, without other people seeing or realizing that (2 Kings 6:16-17). When angels appear to people in the Bible, they often take on physical form. There is one common theme in that: they appear as normal people. Examples of that include:

Nowhere in the Bible we encounter the description of how angels are normally pictured: human beings with two wings. However, there are some angelic beings described in the Bible who do have wings. There are gold cherubim whose wings overshadow the mercy seat in the tabernacle (Exodus 25:20). In Solomon’s temple there were also two cherubim in the Most Holy Place. Each of their wings was 2,5 meters long (2 Chronicles 3:12). In Ezekiel 1 and 10 cherubim are described as well. It is clear that the vision of the cherubim is so overwhelming, that Ezekiel cannot find words to properly describe them. However, he does mention that they have four wings (Ezekiel 10:21). In Revelation 4 we probably encounter the same beings, only now they each have six wings (verse 8).

The six wings are in line with the description of another kind of angelic being, the seraphim, in Isaiah. Besides having six wings, we read that they have feet, that they have faces, and that they talk. So they seem to have a human form and also wings. This is the place in the Bible that comes closest to the pictures that we often see of angels.

It seems that angels, as spiritual being, can appear in different forms, among which the human form; and that there are different classes of angels that look different as well; and that some angels have wings. However, the Bible does not give us enough information to know everything about angels. There is a good reason for that: the Bible does not want us to know angels, but wants us to know God through his Son Jesus Christ!

Also read: What do angels do?

100% Free Bible Course
We now offer a 100% free, Internet based Bible course. In 15 short lessons you will learn God's message for you in his Word.
Click here to enroll
Angel Cherubim spirits

What is the third heaven?

Are there evil spirits in heaven?

What was Paul’s thorn in the flesh?

Did Elijah go to heaven?